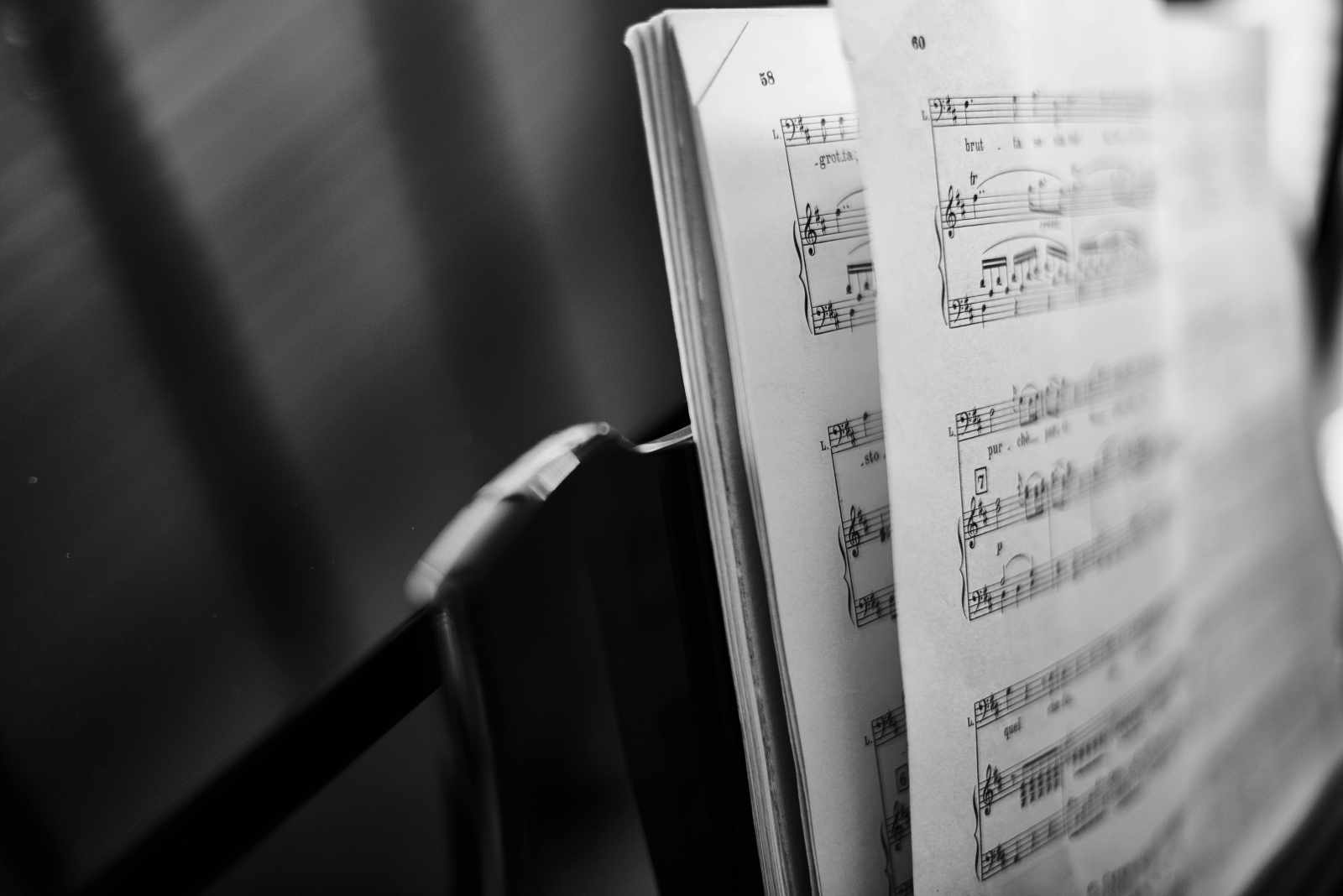 The Parable of the Masterclass

I stood on the stage in front of the renowned German vocal coach and 30 of my new peers and professors in the sweltering performance space. It was early July, and I’d arrived in Austria only five days prior. Two months before that, I walked across a stage and received my Masters of Music in Vocal Performance. And two months before that, I walked into a classroom at a university outside of Atlanta to audition for a six-week opera training program in Austria.

I arrived three days before the program officially started. The six weeks were littered with a series of masterclasses and performance opportunities, culminating in a final Meistersinger competition. The auditions that would determine in which concerts we would sing occurred within the first three days of the program. Knowing that jetlag adversely affects the voice, I decided to give myself a few days to adjust so that I’d be in tip top shape for the auditions.

I’d learned a few new pieces for the program, and brought a couple more I wanted to work on with my new teacher. It was my first time choosing and learning songs without the guidance of my voice teacher. But I had a masters, so I figured I was up to the task. For the audition, however, I chose to present pieces I knew inside and out. In the three days I spent acclimating to the new time zone and learning the layout of the city, I focused all of my nervous energy on the auditions.

Orientation day arrived with its flurry of meetings and introductions, tours and information. The program would start in full force on Monday, after the auditions. In the meantime, they had arranged a few opportunities for some lucky singers. One of those was a masterclass with a vocal coach whose resume was enough to make any opera singer gulp nervously. I was in that weird emotional place of confidence from my freshly minted degree and lingering insecurity of being a student. I knew the degree gave me heft, but it was a perception I didn’t feel I totally deserved.

I walked into the Heim (our dorm building) and inspected the bulletin board on which they posted announcements. My stomach dropped when I saw I’d been put on the list for the masterclass. There was a space next to my name to write which aria I would present. I paused and considered before writing down one of the brand new pieces I’d brought. It was lovely, and it was short, so there’d be plenty of time to work through it. As the masterclass was the next day, I didn’t have time to arrange a rehearsal with the pianist. I shrugged and figured it would be fine.

Masterclasses are their own special kind of hell for a perfectionist with performance anxiety. One stands before the teacher or coach, sings their piece, then the teacher coaches one through areas of improvement. This would be all well and good if it weren’t for the fact that it occurs in front of an audience. It is sold as an opportunity to learn from a great teacher, and for the audience to learn along with you. For me? It amplified my general insecurity and dialed it up to eleven. I learned, over the course of grad school, that in such situations it is best for me to go first and get it out of the way. Otherwise, I compare myself to all the singers that go before me and work myself into such a state of anxiety that my brain shuts down.

The hour of the masterclass arrived, and I walked into the small performance space dressed professionally and made up. I grabbed a program and groaned when I saw my name in the middle of the list, just before the break. I sat down and focused on my breathing. At least the seats were mostly empty, I told myself.

The first four singers worked through their arias, all of which were lengthy and impressive. They were all older than I was, and had come into this program with the intention of meeting agents and taking their singing careers to the next level. The seats had gradually filled with late comers who snuck inside in between singers.

My hands shaking, I climbed the three stairs onto the stage, handed my music to the pianist, and walked to the center of the stage. I took a deep breath and said, “Hello, My name is MaryB. Safrit, and today I’ll be singing ‘In quelle trine morbide’ from Manon Lescaut.”

The second I started singing, I realized I had made a colossal mistake in choosing this aria. Having only practiced it a capella, I neglected to make note of the piano part, which didn’t line up with the melody. Except, since I hadn’t practiced, I kept trying to make it line up with the piano part, and the pianist kept trying to play it correctly. I lost track of the rhythm, where I was in the piece, the emotion of the piece. Everything crumbled and my face became a granite sheet of wide-eyed terror. Any shred of confidence I’d managed to cling to evaporated, culminating in the cardinal mistake a classical singer can make-I breathed in the middle of a word.

The teacher stopped me. Though the piece consisted of a mere two pages of music, basically a jingle in the world of Italian opera, she cut me off. That’s when I knew I was in for it. And the worst part was, I knew I deserved it. I knew I’d made the wrong choice, and now it was time to face the consequences. It was the second day of this program, my first time singing in front of my peers. And I had completely whiffed it.

The teacher spent the next 10 minutes eviscerating my performance. I didn’t know the rhythm, I wasn’t leading the pianist, my Italian wasn’t pure. But worst of all, “You have no passion. And you will not make it as an opera singer if you have no passion.”

As I ingested every unfiltered word, I focused every ounce of energy on receiving her feedback graciously. I wouldn’t cry. I wouldn’t argue. I forced my face into a polite smile and swallowed the heat of shame threatening to overtake me. My humiliation was bad enough without adding an inability to receive criticism to the list. She asked me to try again. I began, and this time it was, if possible, even worse. She stopped me again, then told me to sing the last couple lines of the song. I obliged, not completely butchering it and even mustering out a passable sustained high note and some acting.

When the music ended, there was an excruciating pause. She shook her head, then told me to sit down. It is customary to applaud when a student finishes their time up front. The room was silent as I collected my music and climbed back down the stairs.

The teacher announced that we’d take a ten minute break before hearing the next singer. Everything in me wanted to leave, lock myself in my dorm room, and try to forget what had just happened. I considered this course of action as I shoved my music back into my bag. The room was not only filled with peers, but the faculty of this program, professional voice teachers and coaches who would hear me sing for my audition the next day. There were few things more unprofessional than showing up unprepared for a masterclass with an esteemed teacher. The only thing worse would have been if I performed in cut-offs and a crop top.

I decided that I’d lost enough dignity that day without adding “cry baby” to “unprepared” to my list of terrible first impressions. I sat through the remaining singers, some of whom also got stern lectures, but all of whom at least got to finish their arias. Once the masterclass concluded, I did my best to exit at a normal pace and walked back to the Heim.

I reflected as I lay on the twin bed in my dorm room rethinking my entire life. The worst part of it was that she was right. The opera world was becoming tougher every year as houses closed and opportunities dwindled. If I didn’t have a deep passion for the work, I wouldn’t make it.

I’d left grad school unsure of what exactly I wanted to do with my degree. Becoming a professional opera singer wasn’t a lifelong dream of mine. But I now had that skill in my tool chest, and there was something comforting about the fact that I was on a designated and respectable path. I stumbled into grad school having never sung an aria, and yet here I was, getting yelled at by a big name vocal coach on a stage in Austria, the birthplace of some of the classical greats.

I realized that she touched on something in me that day-a belief that lived in my bones and came out in moments like this. At least part of me didn’t believe I had the talent to make it as a singer. And every time I walked onto a stage, I carried that with me. Every song I sang was infused with a need to prove to myself and the audience that I was good and I deserved to call myself a singer.

Like with any moment awareness, I wasn’t sure where to go from there or how to perform differently. But I knew that I had an audition the next day, and then a few days after that, the classes and performances would start. I reminded myself that I was there to learn, and in that regard the masterclass was a success.

As I prepared a binder for my audition, I made a mental note to figure out who the pianist would be and to find time to practice with them. I texted a couple of friends from grad school, who commiserated, and made the scheduled call to my parents. Once my affairs were in order, I showered and got dressed for that evening’s mixer, met up with my suitemate, and prayed none of the people I spoke to would bring up that day’s masterclass.

We mingled and made friends and for a moment I forgot the humiliation of earlier that day. There were a lot of unknowns about what was to come, but for the moment, learning and living to fight another day was enough.

Published by Mary B Safrit in Parables, The Creative Life
Tags: Parables of a Single Christian