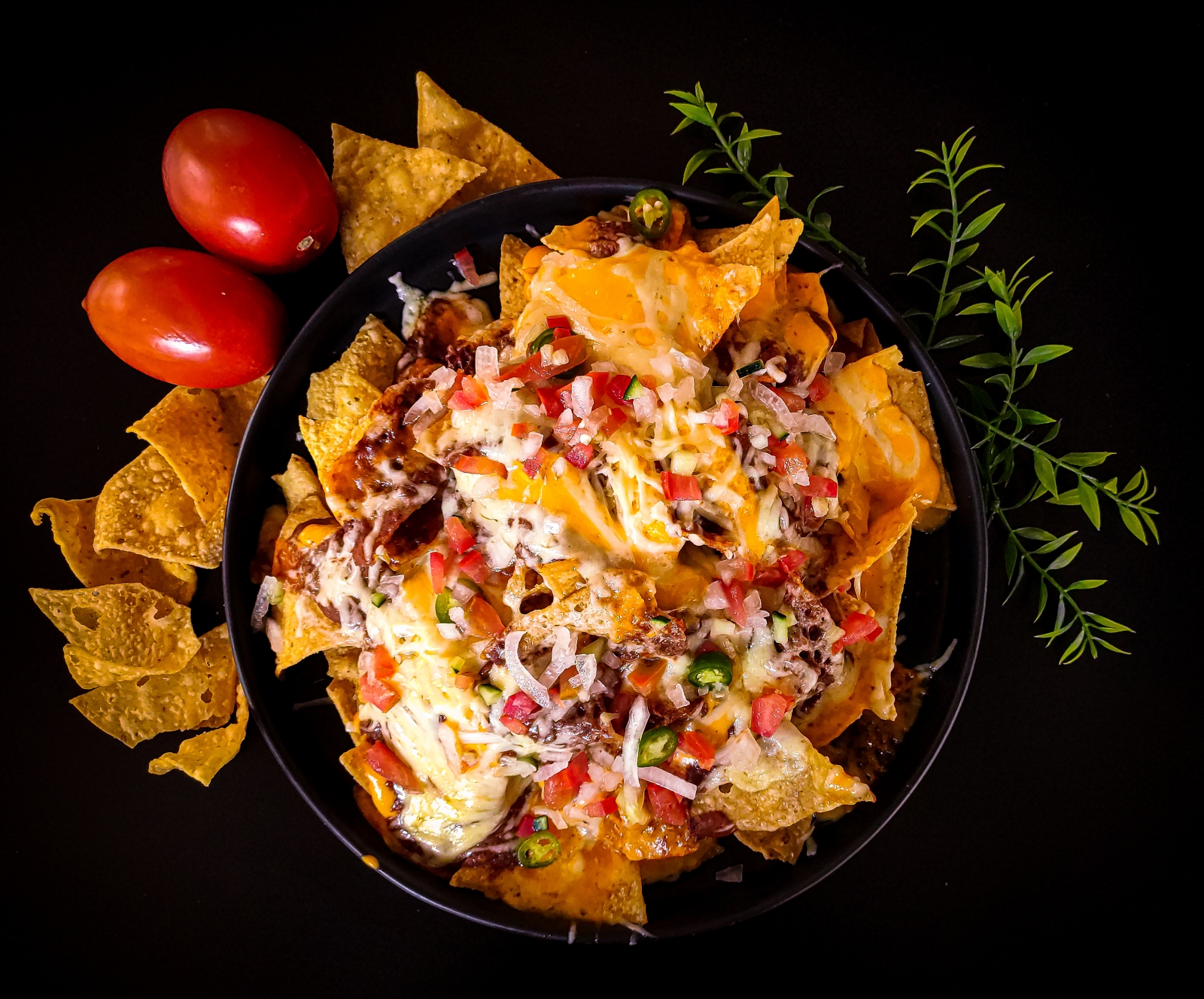 The Parable of the Nachos

I sat on the cool tile of my bathroom floor waiting for the feeling to pass. I knew that evening, sitting in my favorite writing bar, that this would happen. But I made the choice to order the pulled pork nachos. I shook my head contemplating the moment of decision for which I was now facing the consequences. My favorite bartender, Roberto, walking over and asking if I wanted something to eat. The pause. The vacillation between the kale salad--no pickled onion, and the pulled pork nachos. "I'll have the nachos," I said.

Pulled pork nachos. Home-made tortilla chips, melted cheddar, pulled pork, guac, pico, and a drizzle of sour cream. There I was, six full hours later, still basking in the after effects of my meal choice. I knew the reflux that awaited me, but I ate every last morsel on the plate.

Two in the morning, sitting on my bathroom floor, dancing between reflux and full on yarfing. As I sat there waiting for my stomach to forgive me, I considered pondering the chapter I worked through that evening. Instead, I had “Right Hand Man” from the musical Something Rotten stuck in my head. I sang the words in a loop, and thought about my most recent voice lesson. I started, winced from the sudden moment, and recalled that reflux is detrimental to one's vocal cords. So I shouted out a couple of prayers to Jesus in my head, then immediately felt guilty about my perfunctory tone. I mulled over the general lack of fervor in my spiritual life, vaguely asked Jesus what that was all about, then asked the Holy Spirit to help me not talk to God like a robot.

Then I cleaned the grout in my shower.

I recalled meeting people who say this is the hour they most connect with Jesus, those moments of sleeplessness, tossing, wide-awake exhausted, or nursing a baby. They feel Jesus woke them up to hang out with him. I have no doubt this is the case for them. For me on that particular night, it was the pulled pork nachos.

I sat on the rim of my tub, scrubbing the inexplicable grime out of my grout. It felt weird, having this awkward disconnect, almost like I’d forgotten how to pray. I hadn’t, because I could still do it for other people… but for myself and by myself? It could feel like I’m practicing my times tables over summer break. I wanted to go all Ann Voscamp and wonder at the majesty of a bubble. It left me wondering, What is wrong with me?

Months after the nacho situation resolved itself without incident, I continued to mull over this question, most times I sat down to pray. Then one day, I felt a mental nudge, and a different question presented itself.

Why do you feel the need to impress God with your prayers?

This gave me pause. And when I wasn’t trying to impress God with how holy I was, as exhibited by my super spiritual prayers sprinkled with scripture references, I was guarded and my prayers came out stilted. I wondered, Why do I approach God in the first place? Am I trying to earn his approval?

I thought back to my most genuine moments of prayer--the gut-wrenching, swear-word-filled, incoherent mumblings of the pain that periodically overtakes me. Or the time when, on a hike with friends, I was struck with the goodness of that moment, noticing that a deep contentment had settled in me somewhere on the way down the mountain. I was bringing up the rear and paused as my friends navigated a tricky section of the trail. As I watched them pick their way down the rocky incline, I asked God to help me remember this small moment in which I realized that life is impossibly good sometimes.

Dramatic moments were all well and good, but what about the day in day out boring moments permeated with the most ordinary of tasks and responsibilities? How was I to pray when things were just mediocre, neither devastating nor exuberant?

When that question entered my mind for the first time, I wondered about my picture of God. Did I think he was the type of deity that demanded hyper-spiritual piety when I was on the verge of blowing chunks? I remembered a sermon from one of the pastors at my church, in which he asked us how we imagine God’s facial expression when he looks at us. He said that he used to feel like God looked at him with vague disappointment. In a later sermon, the pastor posited, “Do you ever picture God smiling or laughing when he looks at you?”

In my twenty-nine years in various churches, living as a Christian that whole time, had I ever considered this? A pastor I had in college used to remind us that God rejoices over us with singing. He compared it to his son spontaneously making up a song about Spongebob out of sheer delight. I’d forgotten how much that meant to me at the time. As my mind recalled it nearly a decade later, it still struck me.

I didn’t have an answer to my question at that moment. But finally asking the right question was a start.

Published by Mary B Safrit in Christian Living, Parables
Tags: Parables of a Single Christian